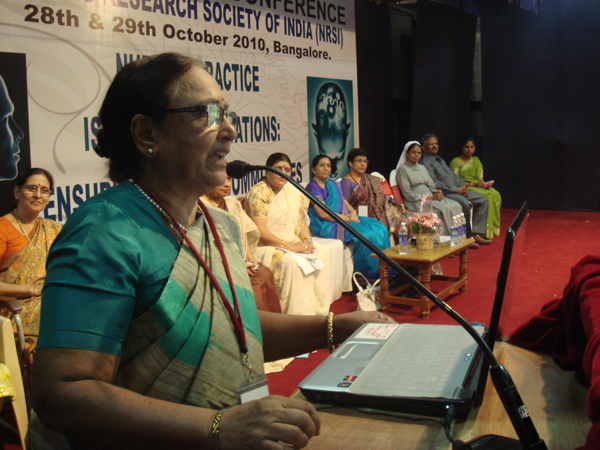 Implementation of Evidence based practice in Nursing through EBP champions

The root of “Evidence-based practice” in nursing lies in Evidence based Medicine. The seed of the concept of Evidence based practice was introduced first by Archie Cochrane in 1972.This concept was further elaborated by Dr Guyatt et al and Dr David Sackett over the next few decades. Presently Evidence based practice, known as EBP in short is understood as shifting the focus of clinical decision making from “intuition, unsystematic clinical experience, and pathophysiologic rationale” to “Best Research evidence integrated within the framework of clinical expertise & patient’s values”. Although this revolutionary concept is well accepted by the nursing community however the adoption and implementation of EBP in daily nursing practice is still a far cry in India.1, 2

The question of how EBP can be integrated in the nursing practice raises many issues and deliberations. There are a variety of strategies that have been developed and implemented in the effort of using EBP for nursing practice excellence.3  The most popular among them is the method of “Guideline based EBP” where “up to date best research evidences” are systematically collected, carefully analysed and practice guidelines developed. These guidelines in turn are implemented in the nursing practice. The typical process of EBP can be depicted through the following figure.

Fig I: Steps of Evidence based Practice

The above figure depicts a very scientific and a highly attainable process of EBP. However, quite often this method of EBP falls flat on the face after the initial few steps. The constraints present in this particular strategy are speculated to be:

Asking well rounded clinical questions is the first step in this effort. The question can be both a “bottom-up” effort and a “top down” one. In the “Bottom up” effort the question arises in the mind of the clinicians. In contrary it is the effort of the administrator to stimulate questions in the mind of the clinicians in the “Top down” approach. Most of the time confusion prevails in an organization regarding “who should be asking the question” and generally leads to a situation with nobody taking the initiative.

Research evidence comes in various forms. Most of the clinical nurses lack the requisite skill and knowledge for searching evidences. The ability to assess the quality of evidence is also an important skill needed in this step. Expecting nurses to do this step all by themselves or training every one of them in the organisation to do so may be an overambitious project for the management leading to unnecessary draining of resource.

Ideally in this stage the “best evidence” gathered is balanced against the issues of feasibility, cost, benefit, resources and the patient’s values. But most of the time, in reality these guidelines are prepared by experts without taking into considerations the organizational factors. The clinical nurses working in the bedside are also seldom involved in the preparation. Thus the guidelines become disjointed and distanced from the users and the patients.

This is the most crucial step in EBP but unfortunately the least effort goes in this phase leaving the individual nurses to either accept or discard the guidelines. Although this step looks apparently simple it involves targeting the nurses’ practices and behaviour & altering human behaviour has always been an enormous challenge throughout human history.

The various barriers discussed above make us search for a solution. Research evidences regarding introduction of “EBP Champions” in the process of EBP seem to be an answer to this search.

Use of EBP Champions

The idea of having EBP champion came from the proposal by Schon in 1963. He proposed that when a new idea or innovation comes, it faces natural resistance by individuals and organizations. Huge amount of organizational and individual resource is drained off to overcome this resistance. Therefore in this situation “someone” must emerge to adopt the idea as his or her own and endorse it relentlessly through social networks. This “someone” was defined as product champion by Schon. After an extensive study of product champions Howell and Higgins refined the definition of champions as

“An individuals who emerge to take creative ideas (which he may or may not have generated) and bring them to life más.

This idea was appropriated in health care settings and the concept of EBP champion emerged.4 Researchers suggested that having “EBP champions” in an organization was an effective strategy to implement evidence based practice especially in countries where the hospitals run with limited resources.5 6

Researchers conducting action researches on the process of developing “EBP Champions” suggested that identifying a potential EBP champion & training her may be the two most vital aspects in this strategy.5 The potential EBP champions in an organization may be at any level of nursing but the most important characteristics that should be searched in a nurse to be an EBP champion is whether she exhibits enthusiasm, passion & commitment for continuous improvement in practice. In addition she needs to be confident in communication and also have the leadership quality to influence others7, 8 The potential EBP champions are then exposed to series of workshops to orient them to the process of EBP, examine their readiness to become EBP champions and learn to formulate questions using the PICO (Population, intervention, comparison & outcome) format. They are also trained to develop skills in database searching. Once the EBP champions are ready they are allowed to operate at their own functioning level with a clear understanding of their role and responsibilities.7 The organisational management is expected to be supportive in reference to providing adequate time and resources to these champions for EBP activities.9

In many Western as well as Asian countries EBP champions have been widely accepted as an important part of a health care organization as they make the very process of EBP realistic and attainable. Moreover the presence and association of a “human factor” in the form of these champions make the EBP acceptable and sometimes even popular among the general nursing population. While it is accepted that EBP champions are essential to implement EBP, it is also important to deliberate into the issues of “fine tuning” the EBP culture in the organizations. Future initiatives in the form of action researches are essential to throw light on the issue of EBP champions and their utility in Indian Nursing Care scenario.